Pandemics and Inequality: From the Black Death to the Spanish Flu (and Beyond)

Recent research by Guido Alfani—who is a professor of economic history at Bocconi University—has explored the distributive consequences of major historical epidemics. In his open lecture, Prof. Alfani explored how the current crisis triggered by COVID-19 prompts us to look at the past for insights about how pandemics can affect inequalities in income, wealth, and health.

Alfani highlighted that the fourteenth-century Black Death, which is usually believed to have led to a significant reduction in economic inequality, often attracts a lot of attention. However, the picture becomes much more complex if other epidemics are considered. The lecture covered the worst epidemics of the past, from the great plagues of medieval and early modern times to the cholera waves of the nineteenth century and the Spanish Flu of the twentieth century. It showed how the distributive outcomes of lethal epidemics do not only depend upon mortality rates, but are mediated by a range of factors, chief among them the institutional framework in place at the onset of each crisis. Alfani also explored how past epidemics affected poverty, arguing that highly lethal epidemics could reduce poverty prevalence through two different mechanisms: redistribution towards the poor, or extermination of the poor. If treated carefully, the history of epidemics and pandemics has much to offer towards a better understanding of the current crisis.

In the discussion, Prof. Alfani shared his views on how the COVID-19 crisis may affect poverty and inequality, arguing the current crisis is much more similar to the Spanish flu in the 20th century than to the Black Death of the 14th century. He covered topics such as the role of globalization in moderating the distributional effects of the pandemic, the importance of vaccination and the special difficulties for governments in developing countries when it comes to mitigating the increase in poverty due to the crisis. 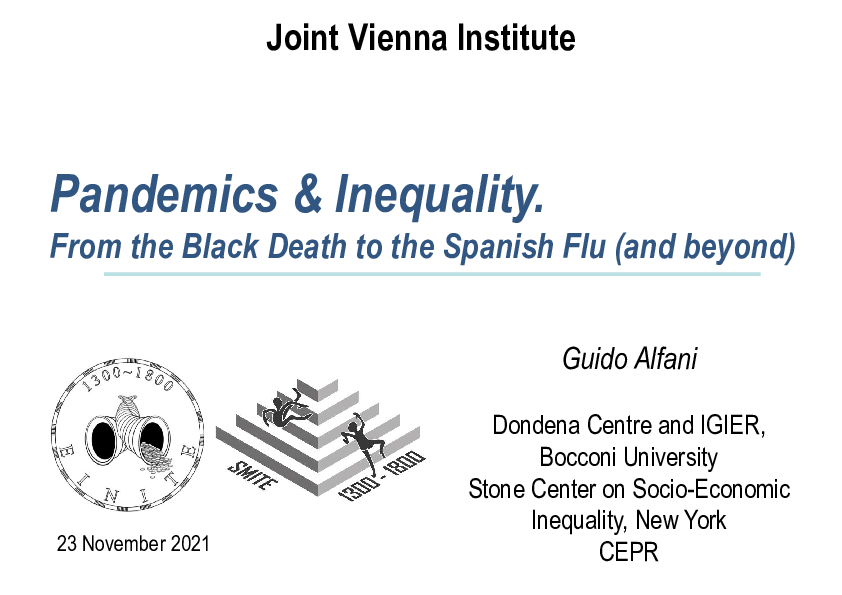