The International Investment Policy Regime: The Need to Reform and Implications for Developing Countries

There is growing tension between the international legal regime concerning foreign investment and the need to promote sustainable development, which has triggered a move towards reforming international investment agreement (IIA) investment regime. Rapid proliferation of bilateral investment treaties (BIT) took place in the 1980s and 1990s, when more than 200 treaties were signed annually. These treaties often contain too broad provisions and do little to support investment that advances sustainable development. Pressing global health, social and environmental challenges have made the need for reform of the IIA regime even stronger. IIA provisions that are most in need of reform are: (1) the definition of investment and investor; (2) national treatment, Most-Favored-Nation treatment, and fair and equitable treatment; (3) full protection and security; (4) indirect expropriation; and (5) general exceptions.

As underscored by Hamed El-Kady (UNCTAD, the reform of the existing stock of more than two thousand old-generation treaties in force today has not yet taken off on a large scale, while the number of investor-state dispute settlement (ISDS) cases continues to grow. As of 1 January 2021, 124 countries are known to have been respondents to at least one ISDS claim and the total number of publicly known ISDS claims reached 1,104. With ever-increasing numbers of disputes between foreign investors and host countries, as well as the recent surge in regulatory or restrictive domestic investment policy measures, new thinking is essential in the rules governing international investment.

Many countries, including developed ones, have been reforming the existing IIAs with the assistance of the UNCTAD. As a part of the UNCTAD’s reform package for the international investment regime, a new tool – the IIA Reform Accelerator – has been launched. Its aim is to expedite the modernization of the existing stock of old-generation IIAs and to coordinate joint reform actions. Newly signed IIAs widely incorporate new-generation treaty provisions, such as referencing public policy interests in the preamble, using a refined definition of investment, clarifying or excluding indirect expropriation, omitting the “umbrella” clause, promoting corporate and social responsibility standards, and limiting access to ISDS.

Following Mr. El-Kady’s presentation, the discussion touched upon the bargaining power of developing countries in the process of re-negotiating of IIAs, the need for coordinated policies between different government agencies inside a country, new climate policies as additional incentives to reform investment treaties, and the role of China in promoting changes in the global investment policy regime. 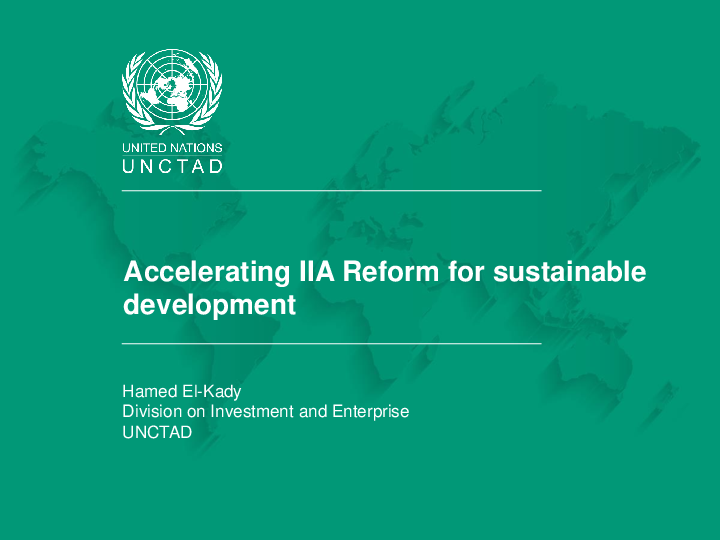