Open Lecture on Measurement, Causes and Consequences of Economic Inequality: A Whirlwind Tour

This open lecture focused on three aspects related to economic inequality – measurement, determinants, and effects. It was delivered by Francisco Ferreira, a leading scholar of economic inequality, who is currently the Amartya Sen Professor of Inequality Studies, as well as Director of the International Inequalities Institute, at the London School of Economics. In addition to his outstanding academic work, he is also known for being one of the designers of Bolsa Familia, the Brazilian conditional cash transfer programme, which is widely considered to have significantly reduced poverty and inequality in Brazil.

The first part of the lecture was on measurement of inequality. It was stated that economic inequality can refer to different things, such as income, wealth, consumption, education, opportunities, life expectancy etc. The most common indicators of inequality were elaborated in detail, such as the Gini coefficient, the Theil index, and the Atkinson index. It was stressed that there are many subtleties related to measuring inequality and that one should be always explicit about the definition of the underlying outcome, as well as consistent when making comparisons across time and between countries.

After the introduction to the measurement of inequality, Francisco explained the two main methods used in the literature for assessing determinants of inequality. The first approach is to use Oaxaca-Blinder decompositions, which apply parametric and semiparametric methods to decompose changes in distribution of some variable into shares that can be attributed to different factors. An example is to decompose inequality in health between individuals into parts caused by variations in education, income, insurance coverage, distance to health facilities, quality of care at health facilities etc. The second approach is to disentangle specific causal effects, by taking a particular policy and seeking to identify its causal impact on inequality. An example of this approach is to investigate the labour market effects of the rising imports from China.

Francisco then turned to elaborating the determinants of inequality, noting first that global income inequality has declined in the past decade or two, but that this decline has been driven by the decline in between-country inequality, as poorer countries have caught up with the rich countries. Within-country inequality, on the contrary, has increased, as differences between rich and poor have risen in many countries in the world.

Despite the overall trend of rising within-country inequality, there have been heterogenous trends across regions. Income inequality has increased between 1990-2012 in Eastern Europe and developed countries, but has declined in Latin America and Sub-Saharan Africa.

Some of the main drivers of the rising inequality in the developed countries have been: a) the skill-biased technological change, which has increased incomes of certain skills, such as IT, and has affected adversely the incomes of the low-skilled workers, due to automation; b) the changes in the labour market institutions, with the decline in labour rights and the coverage and power of labour unions; c) the growing market power of companies, which has led to a rise in pure or economic profits; d) the dramatic reduction in the progressivity of taxation in most of the developed countries.

At the same time, the main reasons for the decline in inequality in Latin America and Sub-Saharan Africa have been the expansion of education, and the silent social protection revolution, with the introduction of conditional cash transfers schemes in many of these countries.

In the last part of the lecture, Francisco elaborated on some of the adverse economic and social consequences of inequality. The first negative effect is that when capital markets are imperfect, which is almost always the case, wealth inequality leads to sub-optimal allocation of resources, in the sense that the rich get most of the credit and pay lower interest rates. The second negative consequence is that inequality and discrimination lead to lower individual performance. The third consequence is that economic inequality leads to inequality in political power, which in turn leads to state capture by the elites, which results in dysfunctional institutions, harming in that way the economy and the society. The next adverse effect is that economic inequality is often found to lead to lower economic growth, which is especially the case for inequality of opportunities. The final negative effect that the lecturer mentioned was that inequality weakens the poverty-reducing power of economic growth.

The presentation was followed by a vibrant Q&A session, with many questions from the audience, which Francisco answered with clinical precision. There were in total around 150 attendees, from 49 countries. 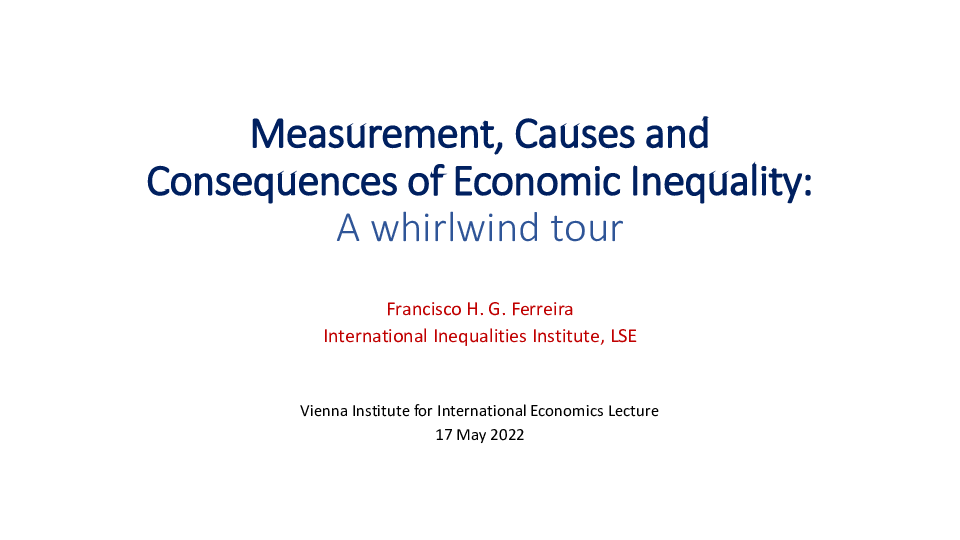