Rising inflation at a global scale from mid-2021 gave rise to diverse views regarding its driving forces and expected duration. Are excessive price pressures temporary, driven by supply-chain disruptions and short-term fluctuations in energy prices? Or is excessive demand resulting in increasing inflation rates? To discuss these issues and the various policy responses, JVI invited three distinguished central bankers from the region to share their insights.

In the first part of the webinar the discussion focused on the first wave of the pandemic. Erald Themeli explained that in March 2020, when the lockdowns were introduced in Albania, interest rates were already low, as inflation was below target and the output gap negative. The discretionary fiscal policy measures aimed at stabilizing the economy, combined with the effect of low interest rates and liquidity providing operations by the Bank of Albania (BoA), resulted in a fast economic recovery as soon as the lockdowns were lifted. The cyclical position of the Czech economy when the pandemic hit the world was different, with inflation on a growing path and an overheating economy. As Peter Král explained, the Czech National Bank (CNB) was just in a tightening cycle, gradually increasing policy rates to 2.25% in early February 2020. In the wake of the pandemic outbreak, the CNB believed that falling domestic and foreign demand would dominate the inflationary effects of the supply side and weaker exchange rate. As a result, the CNB cut rates by 2 percentage points in three steps starting from March 2020. The Czech economy was also strongly supported by a massive fiscal stimulus package, which was enabled by the initially low debt level. Volodymyr Lepushynskyi stressed the importance of high frequency data in the early phase of the pandemic. Based on its analysis, the National Bank of Ukraine (NBU) was able to accurately estimate the fall of GDP in the second quarter of 2020. The central bank was already in the middle of a cutting cycle due to falling inflationary pressures, with the output gap negative and inflation below the NBU’s target. The existing fiscal buffer enabled the government to run a countercyclical policy via financing infrastructural projects, increasing health-care expenditures and supporting small and medium size enterprises. The central bank continued cutting policy rates, thus contributing to the stabilization of the economy.

The focus of the discussion then shifted towards the similarities and differences of the main shocks and policy reactions during the pandemic and the Great Recession. In early 2009, the Albanian economy was overheating, the exchange rate was overvalued, the fiscal space was narrow and financial vulnerabilities were emerging due to euroization and unhedged positions. Countercyclical monetary policy was not an option as it could have resulted in exchange rate depreciation and negative balance sheet effects. Fortunately, in early 2020, the country was in a much better starting position. Well-coordinated fiscal and monetary policies were efficient in mitigating the negative impact of the health crisis on companies and households. The Czech financial system was sound in 2008-9, and there was ample fiscal space for running countercyclical policies. The main shock for the economy was the sharp fall in global demand, hitting the exports-led growth hard. The CNB cut interest rates practically to zero, but the stabilization of the economy was hindered by procyclical fiscal policy. The situation was quite different in the pandemic. Both fiscal and monetary policies were countercyclical. Moreover, the CNB had significant room for cutting rates. Ukraine was also much better prepared to manage the pandemic compared to the Great Recession. At that time, the country had a fixed exchange rate regime, and was struggling with serious macroeconomic imbalances, triggered mainly by the relaxed fiscal policy stance and risky lending. These factors resulted in a serious economic crisis in late 2008 - 2009. That situation is in sharp contrast with how Ukraine entered into the current crisis. The NBU had 5 years of experience with inflation targeting, including the floating exchange rate regime. The government maintained a prudent fiscal policy stance and the current account balance was in slight deficit. Overall, the well-coordinated macroeconomic management of the country was able to prevent a large devaluation of the domestic currency and soaring inflation in the crisis period.

Finally, the debate turned to the most recent events. In Erald Themeli’s view, the Albanian economy recovered from the crisis very fast, with the economy operating close to its potential and core inflation on an upward trend. In addition, the average wage growth is close to 7%, pointing towards robust recovery in domestic demand. Should this positive trend prevail, the BoA would start normalizing monetary policy stance soon. Global energy prices added to inflationary pressures, but inflation expectations seem to be well anchored. Erald Themeli shared the ECB’s view in this regard; these are temporary factors and therefore do not require any policy reaction. Petr Král stressed current demand pressures, overheated labor and housing markets and acceleration of broad-based inflation. With inflation expected to increase further, CNB has already begun interest rate hikes. He also highlighted that monetary policy must react before inflation expectations increase, because curbing them later is costly. Volodymyr Lepushynskyi shared Petr Král’s view. The NBU is a young inflation targeter and therefore it does not have the luxury of not reacting to growing inflationary pressures. The price increases are also broad based, and demand is resilient, accompanied with pressures from the labor market. Fortunately, Ukrainian terms of trade evolved favorably in 2021, resulting in an appreciating exchange rate, which one of the main anti-inflationary factors. According to the estimate of the NBU, inflation peaked in September 2021 due to the early reaction of the bank to mitigate inflation pressures. 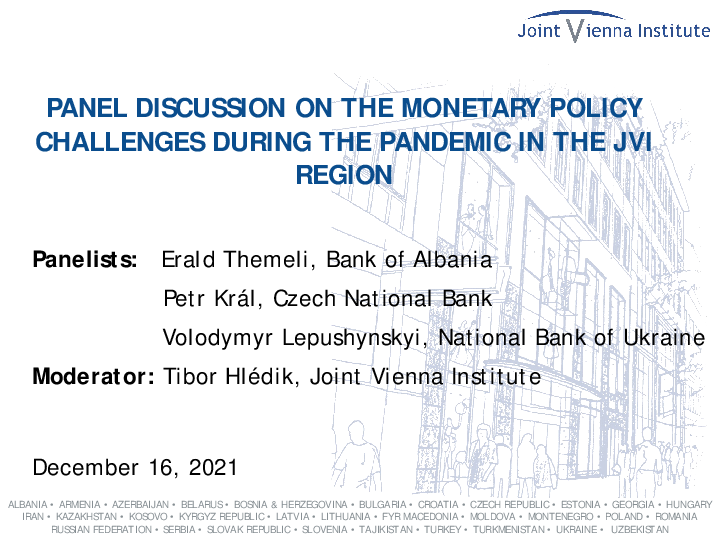