China’s Belt and Road Initiative (BRI), the New Silk Road project, is expected to affect many countries in Africa, Asia, and Europe, which in turn raises many questions: What are the most efficient ways to improve transport infrastructure to better connect Europe and Asia to the benefit of both? Can initiatives focusing on trade relations, land and sea connectivity like the BRI, European integration, and relations between the European Union (EU) and Eurasia promote deeper integration between the two continents? On September 13, 2019, a panel discussed these issues at the JVI. Chaired by Thomas Gruber of the Oesterreichische Nationalbank (OeNB), the panel consisted of Mario Holzner, Vienna Institute for International Economic Studies; Osman Erol, Rail Cargo Logistics Austria; Stephan Barisitz, OeNB; and Franz Nauschnigg, OeNB.

Mr. Holzner began by looking at the long-term efforts of European countries to industrialize their economies. As early as 1943, economist Paul Rosenstein-Rodan promoted the “Big Push” theory, because he recognized that industrialization “is the way to achieve a more equal distribution of income between different areas of the world by raising incomes in depressed areas [faster] than in the rich areas.” Not surprisingly, industrialization has always been closely linked to the evolution of transport systems, especially modern railways, and road infrastructure.

Mr. Holzner has demonstrated empirically that for most countries the speed of their industrialization is negatively related to their distance from established industrial centers. Historic episodes, characterized by fast industrial development, prove that building high-quality transport infrastructure reduces income disparities and gaps in industrialization faster. To illustrate how an ambitious new transport infrastructure project could boost economic activity in Europe, Mr. Holzner presented the findings of a wiiw analysis of the results of investing in infrastructure for two main transport routes, South and North, connecting the most important industrial centers of Western and Eastern Europe. With an investment of €1,000 billion, 7% of EU GDP, countries in Europe could boost their economic growth by an average of 3.5% of GDP, create 2 million jobs, and cut 8% off the time it currently takes for road transport on the core northern route—and current low interest rates could significantly multiply the returns. Setting common infrastructure standards or achieving positive trade results, such as raising exports to Russia by as much as 11% could be additional benefits.

Mr. Barisitz examined connectivity between Europe and Asia from the perspective of the maritime BRI projects. The growing intensity of trade between Europe and Asia is reflected in the increasing share of the Europe—Far East route in total European maritime trade, which has grown from 27% in 1995 to 41% in 2018. In 2018, the Europe—Far East and the Transpacific were by far the two biggest maritime trade routes. Due to the rapid development of trade with China, the Mediterranean route is recovering its geo-economic centrality from the North Atlantic seaboard.

Mr. Barisitz stressed that while Euro-Asian maritime connectivity is expanding and so far predominant, Euro-Asian overland connectivity is expanding even faster because of a structural catch-up, harmonization of customs procedures, ecological advantages, and Chinese subsidies. Maritime and other BRI infrastructure projects are often arranged on the basis of geo-economic or geo-political logic; however, it has been accompanied by the possible emergence of a “debt trap,” which has prompted some host countries to suspend joint projects. But China tends to react pragmatically and is willing to negotiate with debtor counties to mitigate their concerns.

Mr. Erol then framed the also rapidly changing railway connections between Europe and Asia. He emphasized that because the BRI strongly supports traffic flows, it creates both challenges and opportunities for European logistics companies. Alternative routes can significantly improve their performance, he said, citing the expansion of the Southern Route to incorporate the Middle East and the Black Sea region. These new opportunities would reduce dependence on Russian, Ukrainian, Belorussian, and Polish transit routes. Moreover, providing full service to European and Asian clients would make those markets more attractive. Strategic alliances between international and local players along the routes would improve the quality of services and infrastructure and thus reduce transit time. Digitization could also significantly increase transport efficiency.

Mr. Nauschnigg then discussed how the international monetary system is changing as Europe-Asia trade relations evolve. He stressed that the main currency blocs of the world economy essentially still rely on the euro and the US dollar, which coexist with numerous floating exchange rate regimes. The euro bloc comprises all the countries and regions that use the euro as legal tender or whose currency is pegged to it. The dollar-based payment system exposes the EU, China, and Russia, to US foreign policy, even if EU foreign policy has different priorities. Europe relies on Target 2, the €-based international payment system. Mr. Nauschnigg believes the bipolar IMS $-€ system will likely become a tripolar $-€-Yuan system.

The EU’s free trade agreements with Japan and South Korea will likely induce more trade between Asia and Europe. Trade will naturally require improvements to transport infrastructure. China is fully aware of the economically beneficial effects of modern transport routes, expressed in its huge international infrastructural investments, of which the BRI is the most important. In Mr. Nauschnigg’s view, the EU needs to spend more on infrastructure. The related investments could be financed outside the national budgets, as is done in the Austrian ASFINAG (1) projects; or national infrastructure investment agencies could be used to provide the euro area with countercyclical policy tools.

The question and answer session that followed was lively. The audience was curious about the rationale for the territorial choices of the South and North European transport routes identified in the wiiw study. In response, Mr. Holzner stressed that there is no single correct choice for the optimal route in Europe. The wiiw study reflected the natural geographic constraints related to opportunities: avoid mountains, e.g., and exploit the transport prospects offered by the Danube valley along the Southern Route. Another goal was to create a transport corridor that would connect the most significant industrialized cities in Europe. Mr. Barisitz added support for the wiiw proposal, emphasizing its good connections to the New Silk Road and the possible beneficial synergy effects of connecting the two intercontinental transport channels.

Another questioner was concerned about the effectiveness of and returns on infrastructure investments in Europe, given rapidly evolving new technologies that could make infrastructural investments less profitable in future. Mr. Nauschnigg emphasized the high potential for financing these projects at very low cost, supported by currently low interest rates and paired with well-designed government guarantees. These investment projects are also motivated by significant transport infrastructural gaps in many European countries, Germany being one of them. Mr. Holzner supported the view that Europe needs to invest more in infrastructure. A modern European high-speed train network would be greatly beneficial, especially by replacing some air-transport routes within Europe.

(1) ASFINAG holds for “Autobahnen- und Schnellstraßen-Finanzierungs-Aktiengesellschaft”. It is a customer-financed, commercial operator and builder of motorways and expressways. 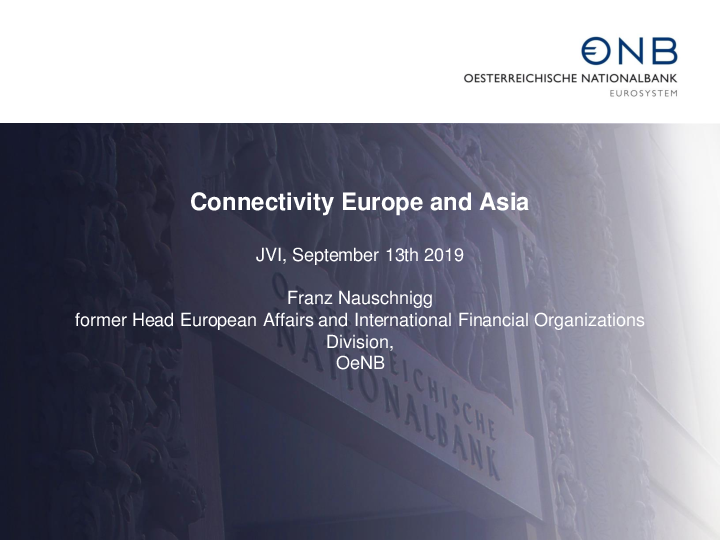 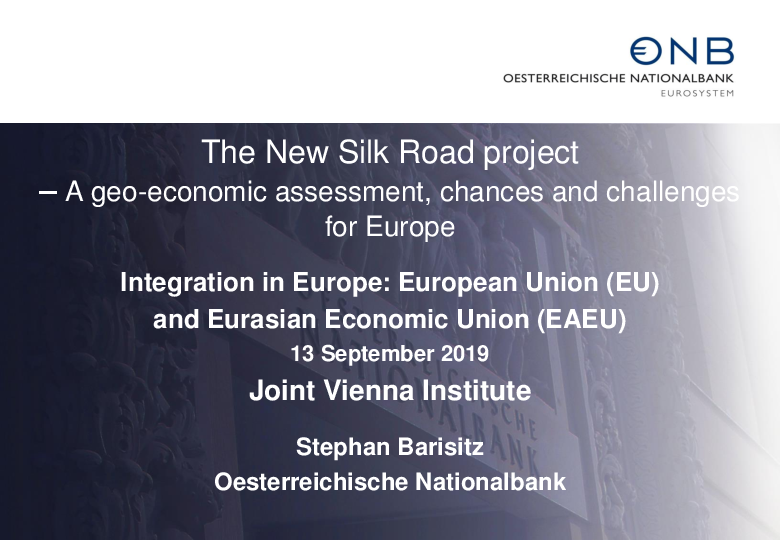 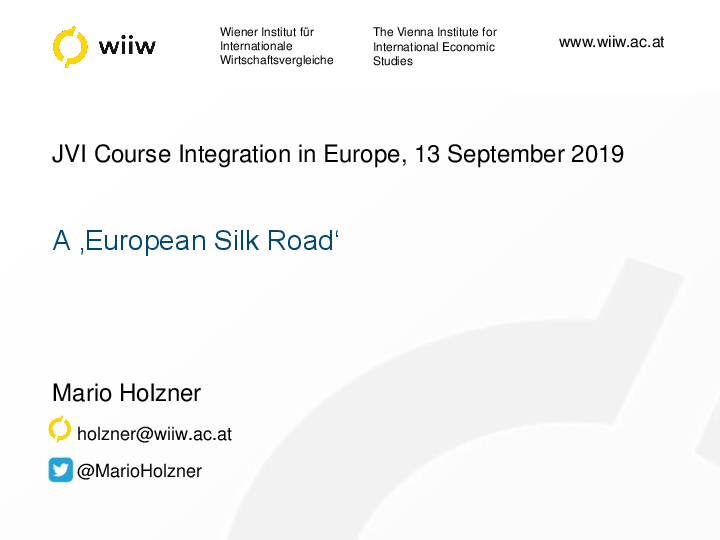